Prevalence of FGM around the world

No Country is safe! 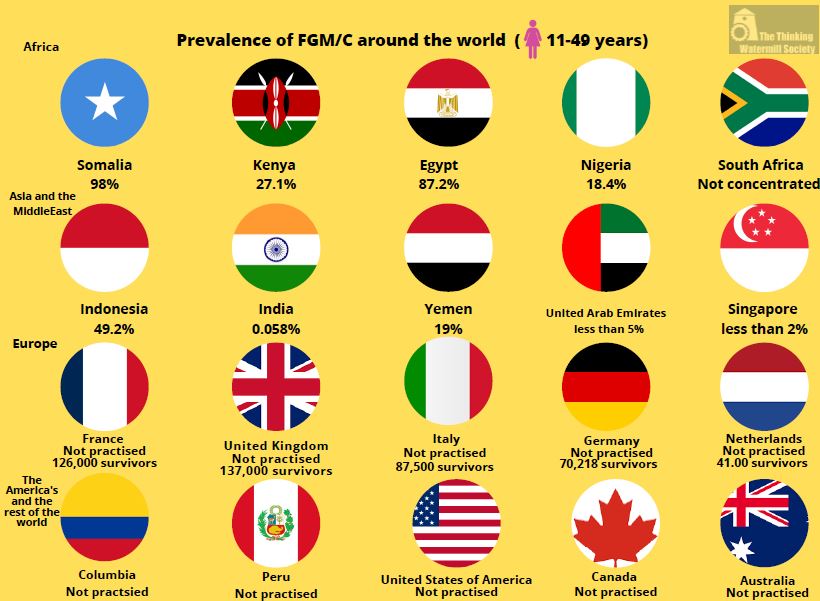 Female Genital Mutilation and Cutting (FGM/C) comprises all procedures that involve altering or injuring the female genitalia for non-medical reasons and is recognized internationally as a gross violation of human rights, health and integrity of all girls and women.

According to official UNICEF figures (2020), FGM/C affects at least 200 million women and girls in 31 countries worldwide. This figure only includes countries where there is available data from large-scale representative surveys.

While FGM/C is nearly universal in Djibouti, Egypt, Guinea and Somalia, it affects 1 per cent of girls and women in Cameroon and Uganda. In countries where FGM/C is not widespread, it tends to be concentrated in specific regions and is not constrained by national borders.

A recent report shows that the amount of women and girls in Germany who have undergone FGM/C has increased to 68,000. The increase of up to 44% from the last estimated total, calculated in 2017, was attributed to a greater immigration from countries where FGM/C is more common.

Currently, only 51 countries worldwide have national laws against the practice of FGM/C. Laws against FGM/C are most common in the African continent as well as in countries where FGM/C is largely known to be practiced by diaspora communities, including Europe and North America. Asia and the Middle East lag behind in enacting legal prohibitions against FGM/C.

To promote the elimination of female genital mutilation, coordinated and systematic efforts are needed, and they must engage whole communities and focus on human rights, gender equality, as well as on the needs of women and girls who suffer from its consequences.