The right to asylum from a gender perspective 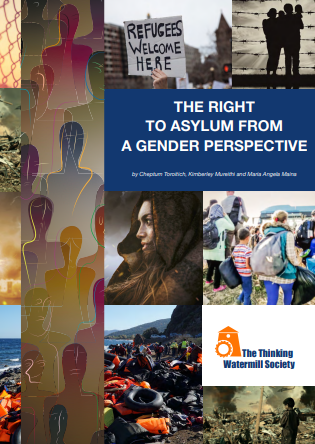 Research studies by the United Nations High Commissioner for Refugees show that there are 79.5 million forcibly displaced persons worldwide. It has come to our attention at The Thinking Watermill Society, that although women and girls consist of half the population of refugees, they are still considered as a “minority” and a “vulnerable group.”
This is not due to their number but, rather, to the systemic discrimination and subordination of their status.
As a result, women continue to suffer from discrimination, whether implicitly or explicitly, and they are often denied the opportunity of being equal to men in all aspects of daily living.
The above reflection shows the basis of this publication, the scope of which is to analyse the differences among the categories of migrants, refugees and asylum seekers.
It is through this analysis that relevant Conventions have been applied in remarkable cases in respect of women, with results that sometimes contrast – at least from an intellectual point of view – with the common sense of justice.
Hence, our publication focuses on illustrating to our readers the need for gender as a protected social group in the asylum determination process, delineated within the 1951 United Nations Convention relating to the Status of Refugees and its 1967 Protocol.
Thus, the conclusions of our studies suggest the adoption of a different approach that leads to considering asylum-seeking women as a special social category in certain circumstances in order to grant them effective protection.