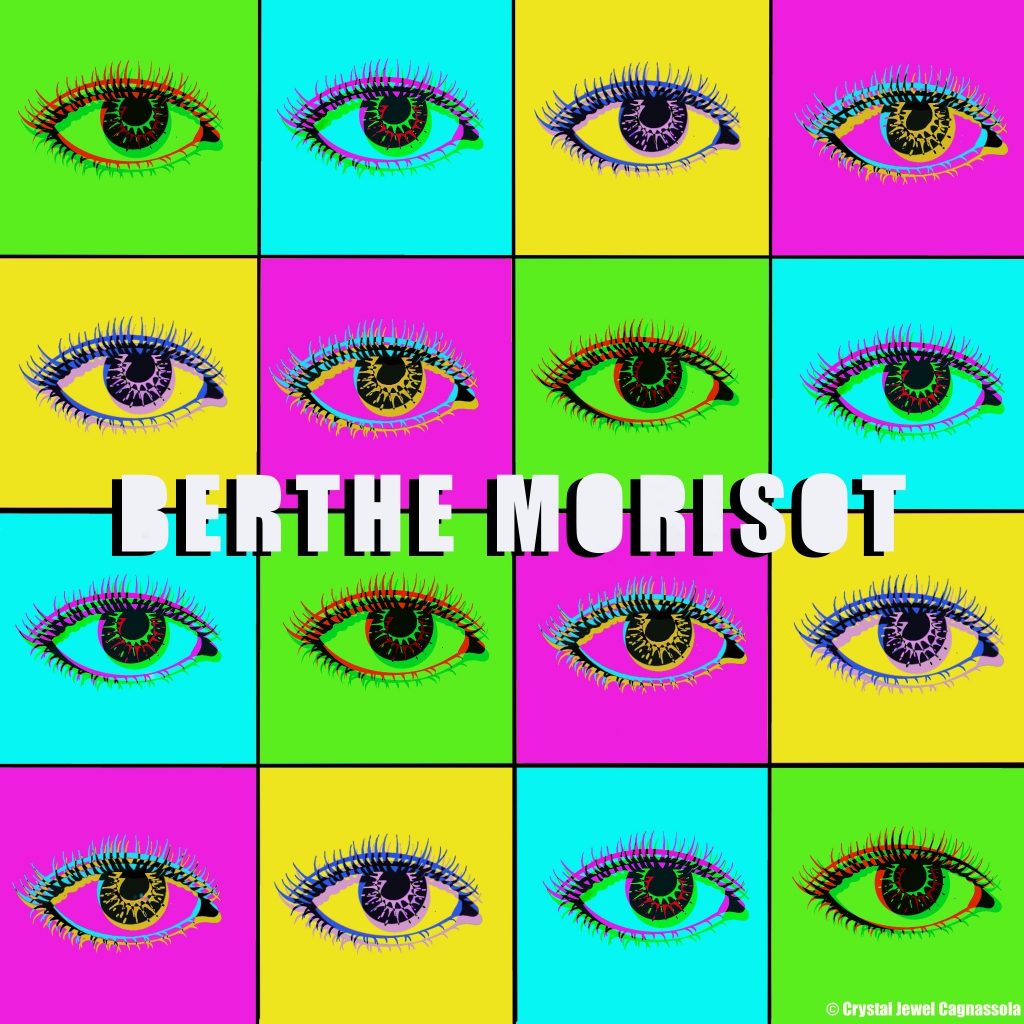 We know her as a woman dressed in white with black hair, portrayed by Édouard Manet in his painting “Le balcon” (“The balcony”). The Musée d’Orsay, which exhibits this painting in its permanent collections, dedicated a temporary exhibition to Berthe Morisot in the summer of 2019. Berthe Morisot, personality with a dazzling charm, was not an amateur artist but a professional strongly committed to artistic creation.  Her entourage was made up of the brightest minds of her time: the writer and dramatist Stéphane Mallarmé and the painters Claude Monet and Auguste Renoir, who established with her a permanent dialogue and considered her as “one of them”.

To talk about Berthe Morisot, we should consider a painting by Édouard Manet of 1874 where he portrays her with a folding fan towards the end of her life: this work is not present in the Musée d’Orsay but in the Palais des Beaux-Arts of Lille. The three-quarter pose in front of the visitor expresses her liveliness and the bent left arm instills a sense of spontaneity. In this painting, Berthe Morisot turns her look as if she wants to avoid the gaze of her friend portraying her. Why is she dressed in black? She respects the mourning following her father’s death, but the presence of a folding fan, that shows all her femininity, is a clear reference to the portraits of Vélasquez or Goya, references clearly seen in the above-mentioned artwork “Le balcon”. The year 1874 is peculiar:  it is the year of the marriage of Berthe with Eugène Manet, brother of the author of the portrait, but also the year of the first impressionist exhibition of the official Salon. Actually, it is also an out-and-out artistic marriage. We admire Berthe Morisot for her paintings of domestic life, but also for a series of portraits painted by Manet, where she is dressed in black appearing mysterious and often even ugly, which tell the intimacy between the two. Only four short letters between the two are preserved , in which Manet calls her “Madame”. The mystery of their possible love is therefore left open. Have other letters been destroyed? Berthe remains discreet but at same time, she is an artist with a strong ambition increased by her attendance at the Louvre and by the practice of work en plein air. From an early age, she shows great attention to French painting and tries to fit successfully into the new pictorial movement started by Manet. Since 1860, she works with those who will become the most important artists of the nineteenth century. L’école des Beaux-Arts did not accept women, so Berthe Morisot did not have many solutions:  she could devote herself to decorative arts or follow private courses. Having the economic means, she chose the second solution. The discovery of other artists took place by visiting the art galleries in Paris, but also the official Salons. Her letters offer us an extraordinary insight into the artistic life of the time. Her family appreciated art: her father dreamed of being an architect, her mother a professional pianist and her sister painted. The two sisters made progress together and some claim that her sister Emma was more gifted. On the contrary, Berthe continued while Emma got married, dedicating herself to the care of her children. Berthe preserved her passion, rejected the pretenders proposed by her mother and continued to recognise to herself the typical freedom as an artist.

Berthe Morisot’s painting is made of petals, thrown according to chance and grace. Through little touches, her painting represents a mixture of vivacity and sweetness, which is found in the paintings of Jean-Honoré Fragonard. In common, they have a light touch and taste for everyday life. Berthe Morisot prefers commonplace themes to historical or religious ones: I invite you to see this painter with your own eyes at the Musée d’Orsay once it will reopen.